FOR FREE HANDS is perceived as part of the international jazz community living in Berlin. The ensemble was a winner of the Berlin Cultural Senate’s Studio Jazz Award.

FOR FREE HANDS create lively, urban sounds that relate to the current zeitgeist and Europe. EUROPA is growing together, FFH provides the soundtrack.

FOR FREE HANDS was booked for the festival Jazz au Chellah in Morocco, combined with the request to realise a project with the Moroccan oud virtuoso Alaa Zouiten. This was so successful that we decided to develop our musical encounter further.

In this constellation, musicians from 5 nations are actually on stage. We are looking forward to the joint CD “For Free Hands meets Alaa Zouiten” and will go into the studio for it from 16.01.2023.

The Quartet For Free Hands was on tour in Spain at the end of April 2019. Here you will find areview of the tour, the new concert videos created there and the new For Free Hands press photos by Sevi Tsoni. These activities were supported by theInitiative Musik gemeinnützige Projektgesellschaft mbH with project funds from the Federal Government Commissioner for Culture and the Media on the basis of a resolution of the German Bundestag. … www.initiative-musik.de

CHRISTIAN ERBER Radiostation NDR: “… Europe is growing together and a quartet from Berlin provides the soundtrack. For Free Hands combines modern jazz arrangements with the rhythms of the Balkans. “Kaleidoscope Freedom“ is the fourth studio album of the international ensembles. Because “there is no freedom, without mutual understanding” quotes the band the French philosopher Albert Camus. Bandleader and guitarist Andreas Brunn adds: „Kaleidoscope Freedom“ stands for the color diversity of our music – and for the different perspectives of liberty.

Listen and watch one of the first videos of the new For Free Hands line up “Kaleidoscope Freedom” @ Schlot, Berlin

Andreas Brunn was born in Weimar in 1964, played the clarinet since the age of six, started learning the guitar at the age of fourteen and has been a musician in bands of various styles ever since. He studied guitar and music theory at the “Franz Liszt” University of Music in Weimar.

Vladimir Karparov was born in Sofia in 1977 and graduated from French high school in 1995. He started playing the saxophone at the age of 13 and was soon giving concerts with a Bulgarian wind orchestra. He played jazz for the first time as a street musician in Sofia. During this time he performed with big bands as well as with smaller formations and also played rock, soul and ska.

From 1995 to ’99 his musical home was the State Music Academy “Pantcho Vladigerov” in Sofia – Karparov had chosen jazz and popular music as his main subjects.
In 1999 he began to study jazz at the Hamburg University of Popular Music and successfully completed his studies at the Hanns Eisler University of Music in Berlin.

The German-Uruguayan drummer Diego Pinéra was born and raised in Montevideo (Uruguay). Because of his German ancestors, he has lived in Germany for several years. He studied drums at Berklee College of Music (USA), at the University of Music in Havana (Cuba) and at the University of Music and Theater in Leipzig. He received lessons from Danilo Perez, Bob Moses, Jose Luis Quintana “Changuito”, Kenwood Denard.

Back in Uruguay he founded the “Diego Pinera Trio” and recorded the CD “Buscando” with the label Perro Andaluz. Finally he came to Germany, where he founded a quartet in Berlin – the albums “Reflexiones feat. Tony Lakatos ”and in 2014“ Strange Ways ”followed as part of the Jazz thing Next Generation Series. Diego Pinera recorded the current album “my Picture” with Mark Turner and Ben Street in January 2015 in New York. When the album was released in April 2016, he toured as a trio formation with the exceptional saxophonist Donny McCaslin and the talented bassist Phil Donkin.
As a sideman, he also played with musicians such as Jerry Bergonzi, Danilo Perez, Hans Glawischnig, Dan Tepfer, Alex Sipiagin, Miguel Zenon, Wilson de Oliveira, Tony Lakatos, Nene Vazquez, Joe Gallardo, Katja Riemann, Nils Wogram and Paul Brody.

In 2015 and 2017, Diego Pinera was awarded the ECHO Jazz Music Prize in the “Best
Instrumentalist of the year national Drums / Percussion “nominated.

Roberto Badoglio was born in 1984 and began playing the bass for a few years after studying piano. At the age of 16 he took private lessons in France with Dominique Di Piazza and in New York with Matthew Garrison and Skuli Sverrisson. In 2005/06 he attended Berklee College of Music in Boston, where he also had the opportunity to study privately with trombonist Hal Crook and to play in her ensemble with the renowned pianist Joanne Brackeen.

After Berklee he moved to NY City, joined the band of the pop singer Adama and continued to play in the city and on international tours with many great musicians of the New York scene, such as Louis Cato, Marko Djordjevic, Brad and Eliot Mason, Hara Garacci. and many others. During this time he recorded his first solo album “Re-Evaluation Time” and released it in 2010.

Roberto currently lives in Berlin and leads the international band Beyond Turbines together with Bjössi Klütsch on guitar, Steve Hunt on keys and Virgil Donati on drums. In November 2015 they released their debut album “Beyond Turbines”. In 2017 he released his second solo album “Lapse Of Worry”. At the moment he is involved in various projects such as “The silent Jazz Ensemble” and the band of saxophonist Reiner Hess Raumschiff Jazz and the “Afrobeat” trio of balafonist Aly Keyta and works with the electronics / funk project Nu Guinea. Roberto Bassspiel is characterized by a unique right-hand unique four-finger technique, which he regards as a mixture of Dominique Di Piazza, Matthew Garrison and Gary Willis.

“… Andreas Brunn is a committed guitarist and composer, an active bridge-builder and reconciler, and particularly fond of the East, notably Bulgaria. … “Perpetuum five” comes as an electrified postbop, more grippy, angular, angular, angry, angry, jazzy. Karparov and Brunn are particularly lively and striking. …

And there is the uncomfortable “Magic Friday” or take “East Side Gallery Story” as the story of a quartet that could easily find its way around the world, but instead turns the burden of (time) historical processing and responsibility into music without complaint must be uncomfortable. And that’s when it is best. And on the double bass Georg Donchev still plays the very sweet mix of boundless jubilation and everything that lurks under the jubilation. … “ Alexander Schmitz

“ Those who can count have a clear advantage, and fractions don’t hurt either. 5/8, 7/8 & 13/16 the rhythmic fabric that the multicultural Berlin flagship quartet For Free Hands is knotting on its new CD “Kaleidoscope Freedom”, and it is bursting with surprising twists and turns, pitfalls and tricky clues.

Biographical references play a central role as well as openness to the many facets of the other that you encounter in the former walled city. But biography and identity are not everything, what is decisive is the self-evident security with which the quartet approaches the various facets of electrified jazz and charges them with energy – and the excessive joy of playing is also decisive. ” Stephan Hentz. 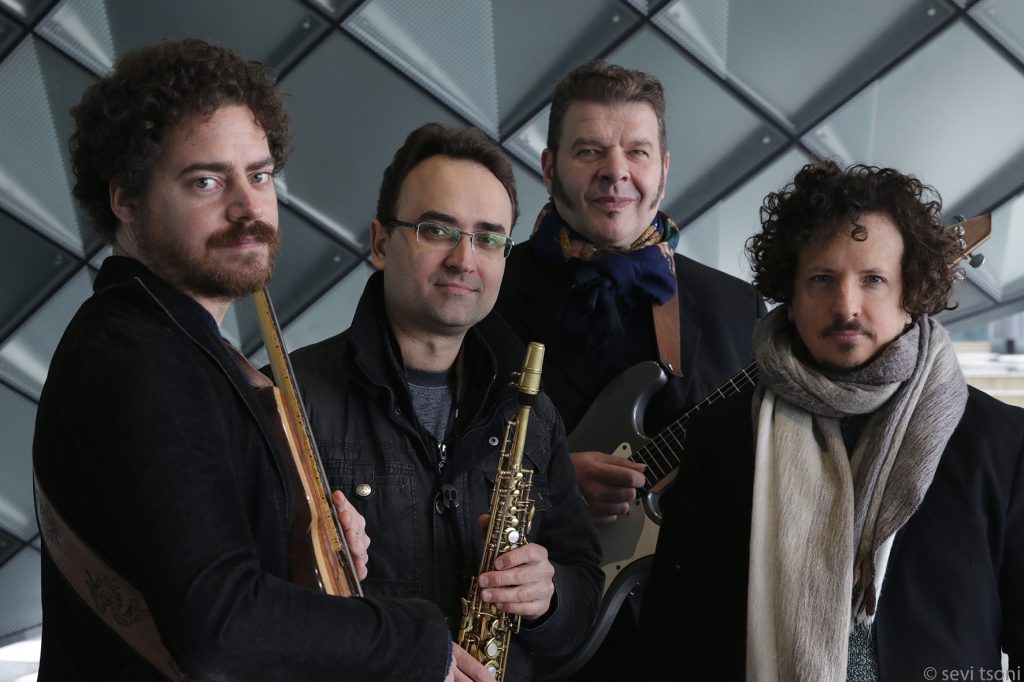