Our new CD was presented on the radio at RBB Kultur! Wonderful Late Night Jazz programme by Ulf Drechsel You can listen to it here! 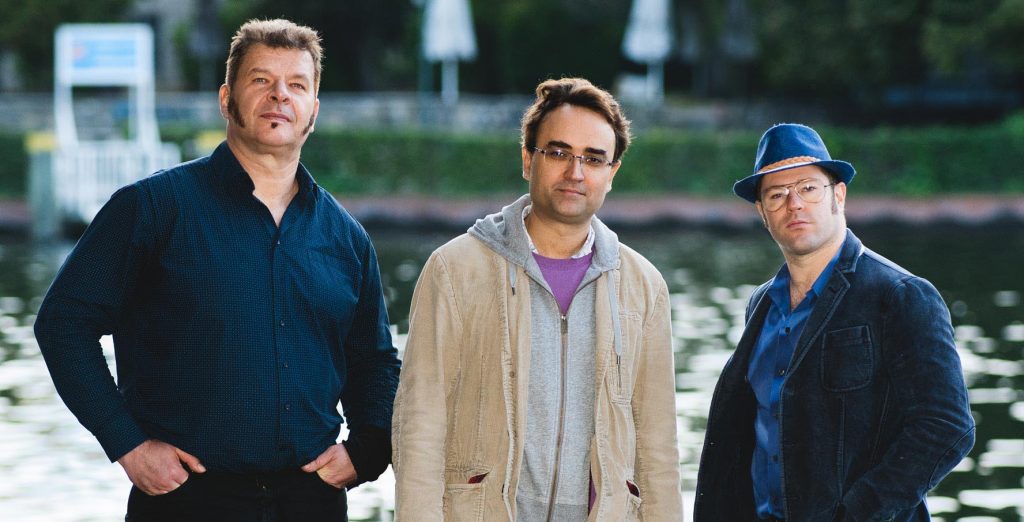 Christian Erber: “DUOMEETING” – a sound that can only be created in the cultural melting pot of a metropolis of millions like Berlin. Created by three virtuosos on their instruments, to whom cultural boundaries and musical stereotyping are completely alien.

With New Urban World Melodic Grooves, Brunn, Karparov and Rainer take their audience on a musical voyage of discovery of a special kind. Their compositions, in which Balkan rhythms mix with funk, Latin and world sounds, testify to extraordinary virtuosity and joy of playing. They never sound bulky or cerebral, but always fresh, lively and lively. As you would expect in a pulsating melting pot. “

Our new CD was presented on the radio at RBB Kultur! Wonderful Late Night Jazz programme by Ulf Drechsel You can listen to it here!

A MINI SELECTION from the Jazz Podium attributes box for guitarist/percussionist Andreas Brunn please? Music as an “elixir of life” and “music with a social conscience” can be discovered in the work of the “Weimar promoter and initiator of multi-ethnic encounters”. The Berlin-based “music activist” is a “bridge builder and reconciler and especially devoted to the East” and “a restless border crosser between jazz, Balkan folk, rock and pop, mostly on the seven-string, but also electrically”. He takes the “world language of music” literally, “crossing Balkan metres with jazz, bringing children [zurzeit online] Rhythm as a social bonding agent and tirelessly explores more terrain between jazz and “world music” with his international groups. His current trio, again on Laika Records, presents “New Urban World Melodic Grooves”.

22 years earlier, one was present when the twins in spirit, Swiss bassist Hans Hartmann on the 12-string Chapman Stick and the Acoustic guitarist on the Roland synthesiser, sent out debut demos. “Peter Cronemeyer from Laika was one of the first to respond. The Chapman Stick was also a novelty at the time. Peter just grabbed it, and I had a good feeling, and then we made the record. It went very well, and Peter was very concerned about the PR. He still does that. …

And now the new trio, a Berlin all-star combo in which Vlado Karparov is more of a regular, while Simon Rainer makes his debut as an electric guitarist. Brunn and he have known each other for years. “He’s quite an exquisite electric guitarist, with great sounds, who reminds me a bit of Pat Metheny. And then it came out in a conversation that he was a Muthspiel student. There is a certain line in it,” Brunn says, noting that the music of the new trio actually developed from the two duos Karparov & Brunn and 13 Strings (S.Rainer/A.Brunn). And the musicians also want to remember their seriously ill friend Hans Hartmann with the new CD. His compositions are, he says, “tricky but melodically beautiful pieces and so “Swindia” and “Tango el Cercado”, both in 5/4, were chosen. It is worth mentioning “Magic Friday” in 13/16 played without percussion, which is “also quite demanding, but in duo with Karparov a great pleasure.”

He summarises the style of the CD as “crossover between both, jazz and world music. Vladimir’s ‘Na Mama’ also sounds very Balkan, and on the other side our duo in ‘Goodbye Pork Pie Hat’, that’s real jazz again”, almost like Simon’s beautiful composition “Sky”, which was written after a workshop with Wolfgang Muthspiel.

A few days before our Skype conversation, he finally said, he had spoken to Vladimir on the phone in Bulgaria. And before he hung up, he gave him a consoling sentence again: “Good music,” he said, “will overcome all that. – Alexander Schmitz

Reviews on the new CD

“Andreas Brunn is on acoustic guitar on this album, his colleague Simon Rainer on electric. The third member is the Bulgarian saxophonist Vladimir Karparov. What makes the formation so extraordinary are the bass functions, which are sometimes taken over by Brunn, sometimes by Rainer, and which make the sound of the ensemble so richer than is actually possible for three musicians. Together with Karparov’s Eastern European influences, this results in a mixture that can probably only be created in Central Europe. Hans Hartmann’s “Swindia” mixes musical elements from Switzerland with scales from India, and the other eight tracks, including Charles Mingus’ famous ballad “Goodbye Pork Pie Hat”, are also quite cosmopolitan. But not in such a way that it would seem forced or laborious – no, all three musicians ride through the cultures casually and naturally. Brunn first played together with both musicians as a duo before he had the idea of forming a trio. The beautiful ballad “Sky” is one of the highlights on New Urban World Melodic Grooves, composer Rainer drawing inspiration from Pat Metheny and Charlie Haden’s legendary album Beyond the Missouri Sky.” –Rolf Thomas

The saxophonist Karparov contributes sibilants here and there, but not only. And Simon Rainer describes his role as follows: “With the help of effect devices like the Fractal Audio, the wah-wah pedal or the Octaver, I can change the timbre at will. In this way I can, for example, make bass or Hammond organ sounds sound and thus support the groove of the compositions in a completely different way than if I were to play only guitar”….

The guitar solo at the beginning of “Swindia” is only short. Afterwards, you think Karparov is imitating the beating of a flock of pigeons’ wings with his saxophone. While listening, one also has the impression that Hans Hartmann has written a new folk song with a catchy melody line that is meant to be hummed along. Karparov takes this up in his playing. And Simon embellishes the song a little with his virtuoso guitar playing, while Andreas Brunn provides the rhythmic corset. And what is that there in the “sonic next room”? Hissing and the noise of thunderstorms? You can hear the snapping of keys, while intricate melody lines spread through the room, thanks to Andreas Brunn. All in all, the arrangement is very concert-like. And also in this piece there are percussive interventions, beat upon beat and bringing the guitar body into play. In addition, we also hear Indian chanting, as we know it from the Karnataka College of Percussion. The result is a colourful sound mosaic with and beyond folk and world music. …
This album is a real treat for the ears and a balm for the soul because of its sophisticated melodic phrasings and dialogue!” –Ferdinand Dupuis-Panther

“Who if not these three musicians would be predestined to initiate “new urban world melodic grooves”? Berlin, still a cultural melting pot of inner and outer European music cultures, offers the ideal breeding ground for new sounds.

The trio’s song material comes from the genesis of guitarist and percussionist Andreas Brunn’s numerous collaborative projects with Bulgarian soprano and tenor saxophonist Vladimir Karparov and South Tyrolean guitarist Simon Rainer. Brunn is constantly exploring new musical and tonal possibilities with changing partners and plays not only catchy melody lines on his seven-string acoustic guitar, but also bass tones with the left hand and hard percussion sounds with the right with the help of his very special tapping technique.

Karparov produces sibilants with lips, tongue and mouthpiece that sound like percussion brooms. Rainer makes bass and Hamrnondorgel-like sounds with effects units like his “Fractal Audio”, wah-wah pedal and octaver. Brunn plays some pieces so “contrasted”. “Magic Friday” and “Goodbye Pork Pia Hat” on his guitar via a second amplifier in stereo mode: on the left channel three bass strings, on the right four melody strings.

And even if guitarist Ralf Siedhoff calls his piece “To Act Like a Bull in a China Shop” – the three musicians storm into the china shop of subtle sounds with the strength of elephants. “Swindia” and “Tango el Cercado” come from Hans Hartmann’s repertoire. All in all, a thoroughly memorable journey into the Wett of beautiful sounds.” -Rainer Bratfisch