The international ensemble with Bulgarian singer Viktoria Lasaroff that beautifully and innovatively blends balkanfolk and world-jazz .

BalkaNova played with the bulgarian star Stoyan Yankoulovat the BERLIN BALKAN SLAMFestival in april 2010. The trio has recorded a CD with Stoyan Yankoulov as guest. It was released in September 2012. The following recordings were pre-editions of the new BalkaNova album.

BALKANOVA, THE VOICE OF THE BALKANS … The Echegaray theater fills up with music. What is it? Jazz or Opera? I am not sure about the answer and, as I can see on people´s face around me, they don´t know it neither.
Victoria Lasaroff who´s standing on the stage, is on a soprano´s recital. How can be this possible? That woman had a deep voice few minutes ago… How does she manage it? A voice which fills up your eyes with tears, which doesn´t allow you to move anymore, which makes you asking for an other song.

The Balkanova trio, with Horst Nonnenmacher at the double-bass and Andreas Brunn at the seven string acoustic guitar give us histories and popular legends of the Balkans who take shape under beautiful songs with an unique way, perfectly done without any mistakes.
It´s obvious that I wasn´t the only person in trance. With the emotion of the moment, some members of the audience intoned the lyrics, as the man sitting next to me who being beside himelf with emotion started singing louder and louder until his wife stopped him. However, nobody censured him even if we could perfectly hear him;

we couldn´t turn a blind eye to so much talent and strenght. Without no doubt we could easily say that the audience had already known the magic of the Balkan band and if people didn´t la-la-la the song, they kept the rhythm with their foot. We were all of us lost in thought, with shining eyes and a big smile, being infected by Viktoria´s serenity on stage by Andreas´ facility to play his seven strings spectacular guitar and by the low sounds which came from Horst´s double-bass.

It was lovely to be there that night, sharing table and beer with strangers who knew what you were feeling at that special moment. It was a night of anecdote and jazz, of stories, legends and magic.

One hour to enjoy one of the best european jazz´s voice, to appreciate genuine professionals who could make a name offering a particular and native product instead of commerializing itself and lost its essence. Yesterday, this Balkan trio achieved to make us smiling with the heart. Lily Sánchez.

The soprano Viktoria Lasaroff was born in Sofia (Bulgaria) in 1975. Even in her infancy, she stood on the “boards that mean the world” in the Berlin Metropol Theater. At the age of 6 she received her first piano and accordion lessons. She continued her musical and vocal education at the Georg Friedrich Händel Special School of Music and as a young student at the Julius Stern Institute of the Berlin University of the Arts. There she studied school music and singing. Since 2000 she has sung several opera roles in both mezzo and soprano.

She showed her warm multi-faceted vocal sound and versatile acting skills both in trouser roles such as the youthful seducer Blansac in “La scala di seta” by G.Rossini and as the femme fatal Lavina in the Neuzell production of “Die Ganz von Kairo” by W.A. Mozart. Private training in jazz singing with Doro Dalg, Judy Niemack and Kara Johnstad as well as seminars and workshops in Brazilian music and Balkan chants expanded her stylistic repertoire.

In numerous song recitals “Slavianska Dushá” with the Ukrainian pianist Olga Romanchenko, her Bulgarian roots unite with her classical vocal culture in songs by Bulgarian and other composers of the Slavic region to create a moving sound experience. Together with guitarist Andreas Brunn and bassist Klaus Axenkopf, their entire cultural and musical background is transformed into sounding emotion in an exotic mixture of Balkan melodies and creative jazz sounds.

Andreas Brunn was born in Weimar in 1964, played the clarinet since the age of six, started learning the guitar at the age of fourteen and has been a musician in bands of various styles ever since. He studied guitar and music theory at the “Franz Liszt” University of Music in Weimar.

The double bass player Horst Nonnenmacher was born in Tübingen in 1962. His musical introduction began in 1979 in a hard rock band. His wide range of musical interests subsequently led him to study classical double bass at the HdK Berlin.

As a founding member of the legendary “Association Urbanétique” and as a member of other current jazz projects such as the “Hannes Zerbe Quartett Bukolik” or the “Modern Klezmer Quartett”, he established himself as a constant in the German and international jazz scene.

He worked with Paul Bley, Mircea Tiberian, Alexander von Schlippenbach and Sam Rivers, among others. Known as a creative musician and composer, he also plays with many artists outside the jazz scene, such as in the Afro-Brazilian band “Oloyé” together with the Brazilian singer Eutália de Carvalho.

Horst Nonnenmacher composed and arranged the music for the variety show “Mythology” and for the “Carmen Miranda Revuepavillon” and is a member of the “Junges Orchester der FU Berlin” as leader of the double basses. To this day, he has numerous tours, CD recordings, radio and live recordings to his credit, among others with Nena. His musical activities reach far and wide, and he has performed from the USA to Australia to all of Europe and back to Germany, for example at the Moers Festival and the Jazzfest Berlin.

“… The Bulgarian-German trio BalkaNova opened the JazzAutumn Ilmenau 2013 with a concert in the city library. Jazz has its own fans and its own colors: BalkaNova mixed jazz with Bulgarian and South Slavic influences. On the one hand, this added an extra charm, but on the other hand, this connection also brought with it a certain strangeness…”

“… Bulgaria is the cultural area that most appeals to the likeable 7string acoustician and music activist Andreas Brunn in his gentle campaign against national and cultural borders. In 2010, Brunn and the outstanding saxophonist Vladimir Karparov, who brings with him an important share of regionality, presented their “East Side Story”, which was of course much more than just that, because the other, the silent half always resonated in the – still wordless – messages… 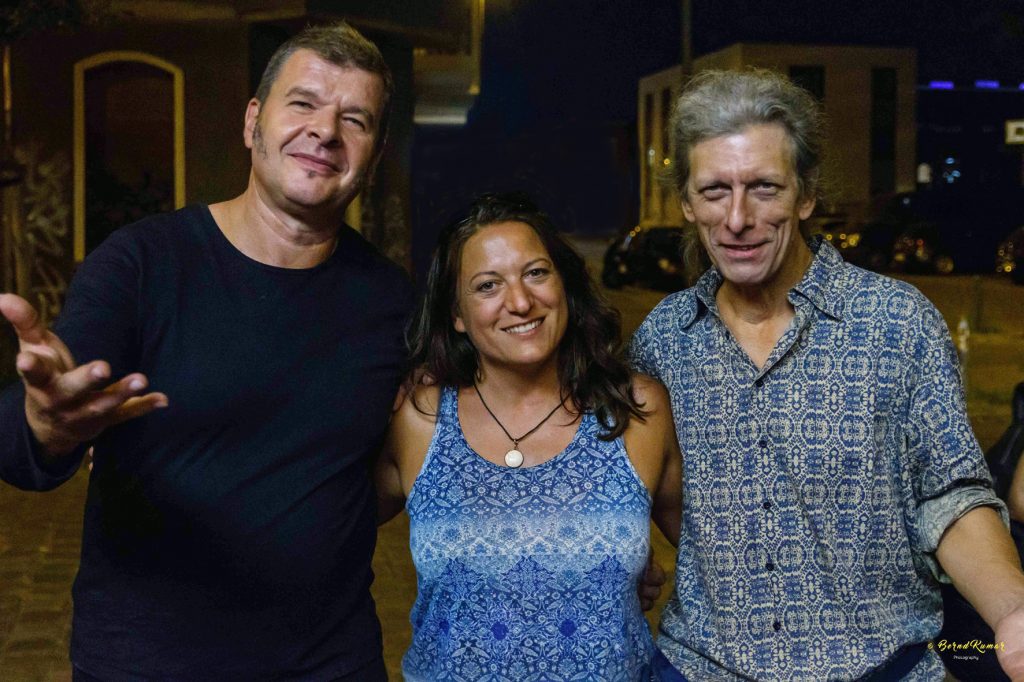 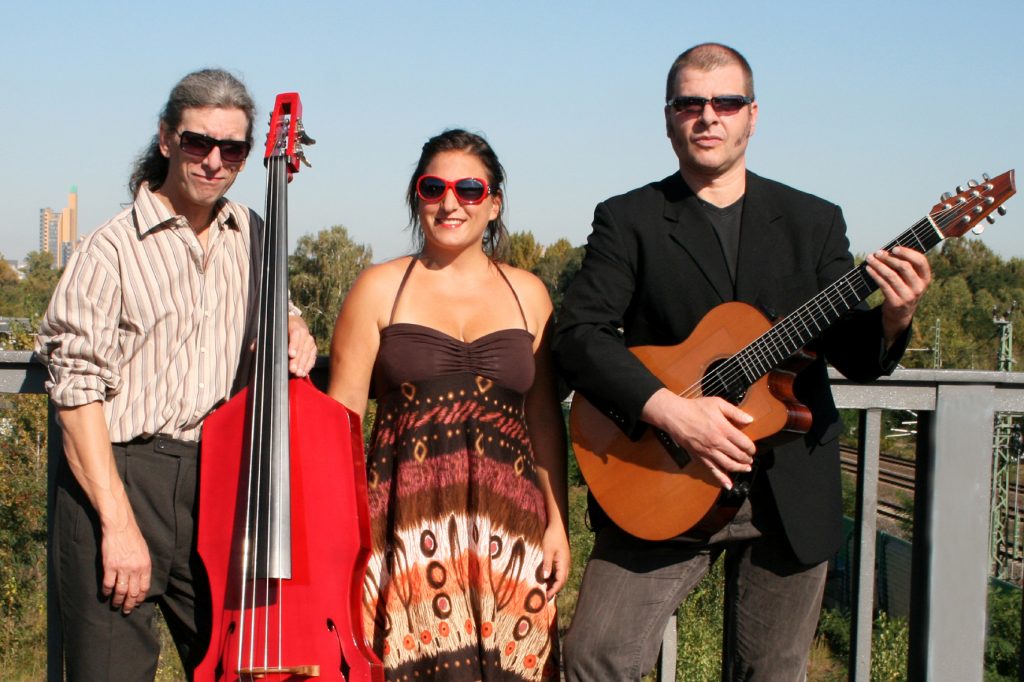